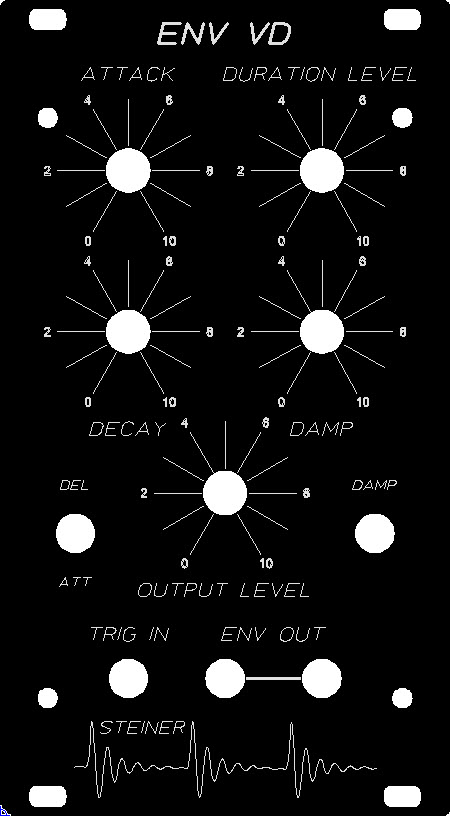 This EG is labeled ENVDVD which means ENVelope Generator Variable Damped. This EG accepts S-Triggers or S-Gates. A trigger is a short pulse that is independent of how long a key is pressed, button is pushed, etc. A gate is like a trigger, but the duration depends on how long a key is pressed, button is pushed, etc.In the 70s and 80s when Nyle was competing with the likes of Moog™, ARP™, Buchla™, Dave Smith™, and others, the typical EG included an attack, decay to a sustain or duration level, then another decay, the release, ADSR. the EGs Nyle designed used the same decay control for the decay to the duration and final decay or release. He explained he wanted to offer a more familiar format as well. So, the ENVVD was born.

The fun begins with the DAMP and ATT/DEL switches…

This is primarily a typical ADSR envelope generator with Nyle’s terminology. It has a couple of other features, too. When you enable the DAMP switch, the decay starts immediately after the input trigger/gate terminates. When the Att/Del switch is in Attack mode, the attack knob determines the rate of attack. When it’s in the delay mode, the attack knob sets a delay time before the EG starts. If the incoming trigger/gate terminates before this delay time is over, the EG will not start its cycle.

You can build this in two configurations. The first is similar to the ENVDL Type 1, in which the Attack only controls the attack rate. The second adds the components to allow the Attack knob to control a delay time before the EG activates. When the Delay mode is activated, the attack time is fixed at the fastest attack rate possible. Either configuration uses the same PCB.

An envelope generator can control anything that take a control voltage. A VCO, a filter cutoff, a VCA. It can even be used on it’s own as a low frequency audio source.

One input, a trigger/gate. This can be configured as an S-Trigger or a Voltage trigger. A short duration trigger will cause the EG to rise to it’s peak, then decay. If the DAMP is active, the decay starts at the end of the trigger, so you may not even get a useable output. Typically, one uses a “gate” which has an arbitrary duration.

One output, a control voltage which rises, falls, sustains, then falls again.

Connect a trigger/gate to the trigger input. Connect the output to a module that expects a control voltage.

Standard 1% metal film are fine. You could also be totally authentic and use 5% carbon resistors.

Nothing special. Electrolytics, ceramic, tantalum if you want.

A good quality pot that fits the form factor of the panel is fine. You will have trouble finding a 2.2M audio pot for the rate controls. You can use a 1 Meg and double the value of the associated capacitor. Or, keep the capacitor value and still halve the pot value. You won’t get as long decays, but other aspects timing which depend on the capacitors will remain the same as in the original.

Use the jacks which are compatible with your system. I use a real 1/8th inch Switchcraft jack to be ultimately vintage, but it makes for a lot of custom patch cables if I want to interface with any other Doepfer or Frac modules.

A good quality that works with the panel form factors

See the notes on the schematics to determine how to configure this as a Type 1 or Type 2. You can also substitute this module for the ENVDL or ENVDT in the Triple EG. It has connections to combine the output with the output of the ENVDT same as the ENVDLs. The only issue is the ENVVD has 5 pots, not 4 and you will have to be creative in your panel modifications to make this substitute. Personally, I just added a couple of these as stand alone modules in my system.

This module only uses the positive supply with no special extra filtering. See the BOM for the power regulation PCB.